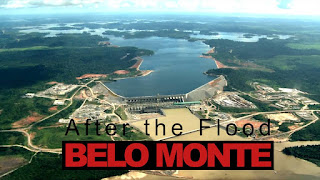 Belo Monte documentary available for free download!
We are pleased to announce that, in commemoration of the Day of Action for Rivers, we will be making available, for free download, the documentary film Belo Monte: After the Flood directed by award-winning filmmaker Todd Southgate, in co-production with Inter-national Rivers, Amazon Watch and Cultures of Resistance.
The film explores the history and conse¬quences of one of the world’s most controversial dam projects, built on the Xingu River in the heart of the Brazilian Amazon.
Todd has traveled to the Amazon a dozen times over the course of seven years to document the con¬flicts surrounding the Belo Monte Hydroelectric project, and in early March he returned to the region as the dam’s construction neared completion. Through interviews with indigenous leaders, activists and local residents, Belo Monte: After the Flood illustrates how this multi-billion dollar mega-project has left a disastrous legacy of broken promises and socio-environmental damage, and shattered livelihoods among local communities of the Xingu.
Narrated by award-winning actors Peter Coyote (English version) and Marcos Palmeira (Portuguese version), the documentary chronicles the inspiring work of indigenous peoples, grassroots activists, and their allies to prevent dam construction and its many impacts. It exposes the gross disregard for the rule of law that marked the entire project, including a massive corruption scandal involving high-level politicians and construction companies. And it shows the unfulfilled promises for bringing “progress” to this remote Amazonian region.
Though Belo Monte’s first turbines became operational in 2016, Belo Monte: After the Flood high¬lights that the struggle for justice and accountability for crimes committed by dam builders continues, and that the Amazon faces more dam threats similar to Belo Monte. On a neighboring tributary to the Xingu River, resistance is growing to stop the Brazilian government’s plan to dam the Tapajós River, home to the Munduruku, an Indigenous group that has relied on this river and its basin since time immemorial.Since the film was first launched in late 2016, it has already demonstrated an enormous potential for raising awareness and stimulating public debate on this critical issue. The film has also been well received at film festival such as the Fest CineAmazônia, where it won a popular jury award for best picture! To further facilitate use of the film for such purposes, we’ve prepared a fact sheet that serves as a companion guide for the film, which you can download here. The fact sheet provides additional information and references for key topics addressed in the film, as well as suggested questions for group discussion. We hope this short companion guide will be helpful in furthering understanding of key issues raised in the film, and as a tool for organizing screenings with discussion of the film at community gatherings and open public events.The film will be made available for free download on Sunday, March 12th, at 12 noon, Brasilia time zone (UTC/GMT -3 hours) on the film’s website and Facebook page (see links below):
belomonteaftertheflood.comfacebook.com/BeloMonteAftertheFloodIf you organize a showing of the film on March 14 or afterwards, please send us a picture!Happy Day of Action for Rivers!Rivers for life, not for death! Xingu Vivo!
Postado por Organic Natural Ecologic às 08:39 Nenhum comentário: 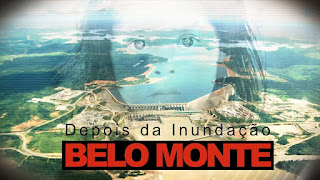 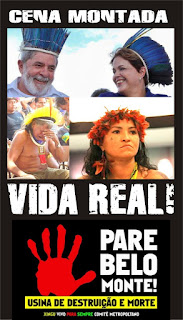